Ship crane: a simple solution for complex tasks in the field of work with cargo.

Equipment, called the ship's crane, is placed on the vessel, usually in its upper part. It has proven itself as a convenient system, capable of performing both loading and unloading. Such operations may be relevant for ships of any level, including in order to lift and launch other floating equipment.

One of the most useful qualities of such equipment is the economic benefit, the possibility of self-loading and unloading without the need to rent these devices belonging to the ports. 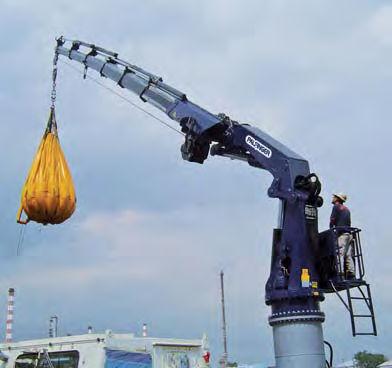 Loading devices can be both stationary and moveable. In addition, they can be full-turn and have a limited angle of rotation.

For universal cargo ships, one can also single out full-swing cranes of stationary, longitudinally, as well as transversely moving types.

The base on which the crane is usually placed is a support structure. The case is installed on it with an operator's cabin and auxiliary systems, due to which the loads are lifted, the boom departure changes, or the crane turns.

For a full-circle tap, rotation can be tolerated either around the base or with the base. An alternative solution would be fixing on the foundation (such an option is provided for deck cranes moving along guides).

Dual cargo crane is another type of equipment that interacts with the goods.

Gantry type cranes moving longitudinally are operated on various types of barge carriers, as well as other vessels that carry heavy cargo and containers.

Both in serial, and in individual projects of cranes, their main appointment is considered work with freights.

If necessary, the cargo suspension of an operated or only constructed ship crane can be upgraded in full compliance with the required conditions.

The main models include:

- PSM, which is a fully hydraulic crane of marine design on a slewing bearing, the boom of which is rigidly fixed. It is set in motion with the help of hydraulic motors, whose carrying capacity ranges from 10 to 3000 metric tons;

- PFM (telescopic boom with support-swivel mechanism). The drive can be hydraulic, electric, or mixed. Able to lift loads up to two hundred tons. The maximum boom reach is 36 meters.

Other options are available for ordering, details of which can be found when contacting the managers of SBS LTD.