results in record sales for Noreq AS

'Safer launching of lifeboats and savings on maintenance are the two biggest advantages of the new concept,' says Styrk Bekkenes, Managing Director of Noreq AS.

ResQ, the Norwegian training centre, has ordered, taken delivery of and installed two complete sets of new davits and rescue boats at its centres near Bergen and Kristiansund. In its training courses for offshore personnel, ResQ puts forward-looking equipment solutions first. It has also previously chosen to go for an aluminium MOB boat from Noreq,

The delivery to ResQ's centres near Bergen and Kristiansund consists of an NPD 6000 ship davit and LBT 525 lifeboat model.

'We are really happy that ResQ has chosen our new systems at its training centres,' says Mr Bekkenes. 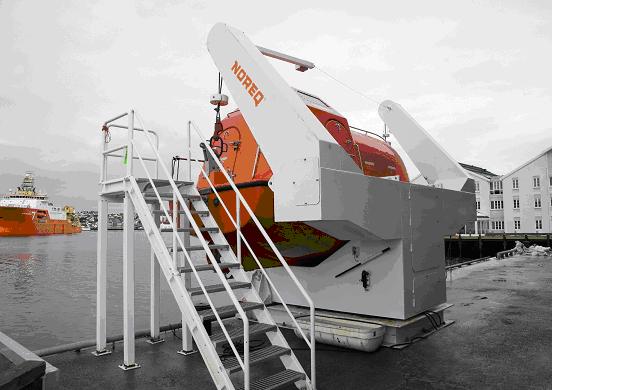 Queries from all over the world

Noreq sees it as a clear trend that the market is now prioritising forward-looking safety requirements.

'We are experiencing great interest in the new davit concept, which more or less eliminates functional faults and maintenance costs. The new davit system is the first in the world to have built-in functional components, thus protecting it from the elements and against wear and tear,' Mr Bekkenes says.

Noreq has delivered new davits to many countries, including to one of the world's most modern training centres in Dubai Maritime City.

We are seeing increasing interest in Asia and South America, where some customers want quality equipment manufactured in Europe. The Norwegian and European markets are also beginning to show more interest, which is probably connected to the fact that there has been a certain general stagnation in newbuild contracts in this area.